Toyota Mega Cruiser is not alone on this restricted market of "very large all-road vehicles". The american Hummer is undoubtedly the most popular, but other car manufacturers launched out with more or less of success their own model.

Hummers were traditionally built by AM General Corporation, formerly the heavy industries division of American Motors, in its Mishawaka, Indiana assembly plant. AM General had planned to sell a civilian version of the Hummer as far back as the late 1980s. In 1990, two matching white Hummers were driven from London, UK to Beijing, People's Republic of China over the rough roads of the central Soviet Union. The Hummers made the drive with ease, and highlights of this journey were broadcast on ESPN in the United States. The publicity would pale in comparison to the attention that the HMMWV received for its service in Operation: Desert Storm the following year.

In 1991, AM General began selling a civilian version of the M998 High Mobility Multipurpose Wheeled Vehicle (HMMWV or Hum-Vee) vehicle to the public under the brand name Hummer. In 1999, AM General sold the brand name to General Motors but continued to manufacture the vehicles. GM is responsible for the marketing and distribution of all Hummers produced by AM General. In the next few years, GM introduced two new homegrown models, the H2 and H3, and renamed the original vehicle to H1. AM General continues to build the H1 and is contracted by GM to produce the H2. The H3 is built in Shreveport, LA.

As of 2004, Hummer has gone international with selected importers and distributors in Europe and other markets. It has only been sold in small volumes, but some celebrities and business people have bought Hummers to satisfy their curiosity. Markets such as Australia have taken interest to Hummers with importers converting the latest H3 to right hand drive despite GM not officially selling the brand in Australia.

This article is licensed under the GNU Free Documentation License.
It uses material from the Wikipedia article "Hummer". 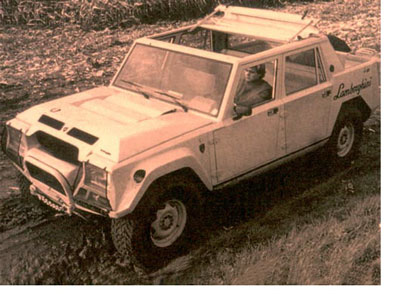 The Lamborghini LM002 is an SUV that was built by the Lamborghini automobile company between 1986 and 1993. Approximately 300 vehicles are thought to have been built. This was an unusual departure for Lamborghini who, until that point was primarily known for high-performance grand tourers and supercars.

The project originally began in 1977 with a prototype vehicle codenamed the "Cheetah" which Lamborghini had designed in hopes of selling it to the US military. The original Cheetah prototype had a rear-mounted Chrysler V8 engine. The prototype was destroyed during testing by the US military. This lead Lamborghini to develop the LM001, which was very similar to the Cheetah, but had an AMC V8 engine. It was finally determined that the engine being mounted in the rear caused too many unfavorable handling characteristics in an offroad vehicle, and the LMA002 was built with and entirely new chassis, moving the engine (now the V12 out of the Countach) to the front. After much testing and altering of the prototype, it was finally given a serial number and became the first LM002.

Lovingly dubbed the "Rambo-Lambo", its aggressive styling and powerful engine made it a success for Lamborghini. Civilian models were outfitted with a full luxury package, including full leather trim, tinted power windows, air conditioning, and a premium stereo mounted in a roof console. In order to meet the vehicle's tire needs, Lamborghini commissioned Pirelli to make two custom, run-flat, tread designs.

The military version of the LM002 elimited some of the luxuries, and featured additions like mounting points for machine guns. The Saudi Arabian army ordered 40, each with the roof able to be opened like a hatch over the rear seats.

In 1988 Lamborghini sent an LM002 to a team of special engineers with the intention of making it capable of participating in the Paris Dakar Rally. They stripped it of anything that added unnecessary weight and it was given an upgraded suspension, engine modifications which brought it to 600 hp, full roll cage, plexiglas windows, and GPS equipment. Unfortunately, the money ran out before it could be officially be entered in competition. Though, it did participate in the Rallye des Pharaons in Egypt and another in Greece, both times driven by Sandro Munari.

Near the end of the LM002's production, a Turin based autoshop owner created a one-off "Estate" version by enclosing the back area and raising the roof. This added significantly to the interior room.

Lamborghini reportedly intends to produce a successor for the 2008 model year.

This article is licensed under the GNU Free Documentation License.
It uses material from the Wikipedia article "Lamborghini LM002".

You know other vehicles likely to come to supplement this heading?
Contact us !